Change the caveat banner on posts

In my opinion, the system has failed.

The problem is that the note below the answer isn’t visible. At all. For instance, I completely missed it on this question and only noticed it after it was mentioned in a comment – and after I actively looked for it, still overlooking it the first time.

In my opinion, the solution should be very easy, and I would be interested if anybody finds it controversial:

Put the banner above the question / answer.

The banner's boilerplate text should or must include a hyperlink to a relevant/helpful/informative FAQ page.

This should be fixed as well.

Notice: This is a UX problem. Developing a proper design for the banner might mitigate the problem. But I still feel (strongly) that changing the layout rather than the design is a better solution. Put the banner above the related post.

As a temporary measure, I wrote a little user script which moves the notice to the top and also emboldens it. You can get it here.

On the downside, it won't add a link, and won't solve the issue of most users missing the notices.

One possible compromise suggestion I have made:

The banner could remain below, in a box, but the text could have (on the left or right) a distinctive stripe that leads to the banner.

← Notice the stripe on the left. That's the kind of thing I am talking about.

It would be less intrusive to new viewers who didn't initially understand it (until they reached the bottom), but it would be a bold flag to the regulars suggesting that this post needs improvement.

Edited to Add: Here is a mockup, as implemented by Jivlain's script: 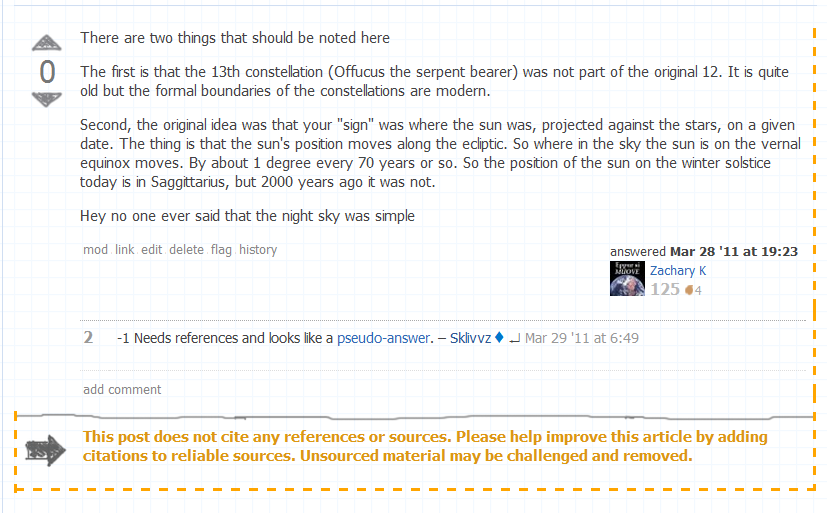 Not the answer you're looking for? Browse other questions tagged feature-request design post-notice .

9
Remove the capital letter on every word (except the first) from the titles?
5
Let's clean up the post notices!
17
Add a review queue for posts with a "citation needed" notice
2
FAQ change about "explaining"