Welcome to the new Skeptics site! I've had an awesome time learning and designing for you! Thanks for all of your feedback and communication. :)

If you're still seeing the old favicons, please load the follow urls and do a hard browser refresh.

We have also themed the newsletter template for this site.

Finding CSS/styling bugs? Start a new post and tag it with "design" and "bug."

Congrats on the new design and thanks for being an amazing Stack Exchange community!

Glad to see the site has launched! I didn't happen to catch the preview of the design before.

However, even though I really don't deserve a say since I missed the discussion while it was still in beta, I find the usability and readability of the site to be much lower than the beta theme and (most) other Stack Exchange themes.

I am not participative here on skeptics, but personally, I really disliked it. That high-contrast black borderless square buttons on white foreground are very ugly in my opinion and they even don't looks like buttons, reminds me some really bad-designed sites from 1996 and 1997. The background is too dark, and I just could tell what it was here on meta where it is lighter than in main discussion site. The tags have a very uncreative undercooked style too compared to other stackexchange sites.

(the middle was removed, this only shows the upper and bottom parts)

This is NOT very good at all.

Yes, the notice is the small font bit at the bottom...

With the live design, I don't think the square buttons for voting and favorites work, they just look strange to me. I'd prefer if those were changed to more conventional buttons like on other SE sites, without the large black block around them.

The Google+, Twitter, ... buttons also look a bit weird in yellow on black, maybe we should just use the desaturated standard ones like on other sites.

The spacing between comments is weird, I suspect some of that are bugs, but it should be generally reduced somewhat.

The bold links in comments are confusing, should be changed to underlined.

The font used for votes, answers, views in question lists is a bit small and thin, it's harder to read than on other SE sites, especially if it's green.

Ads for SciFi.SE on Skeptics.SE are unreadable, with a black font on a black background (pictures link to larger versions) 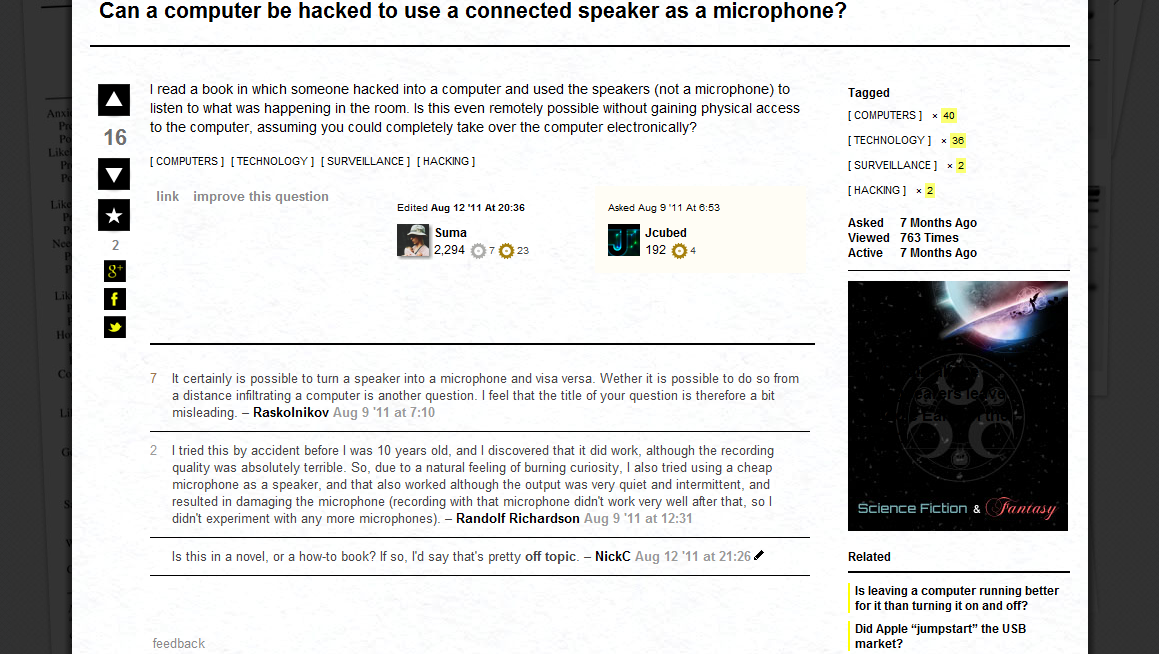 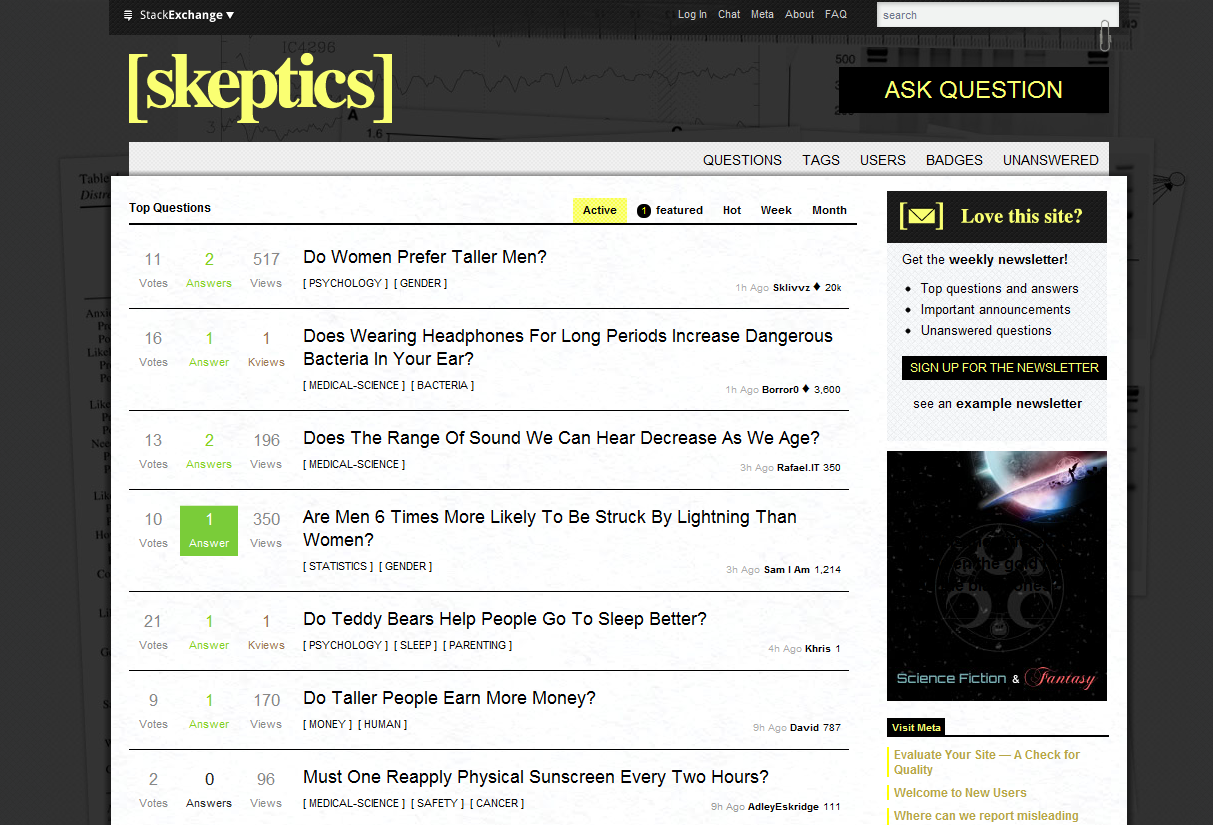 The same problem doesn't exist on other sites: 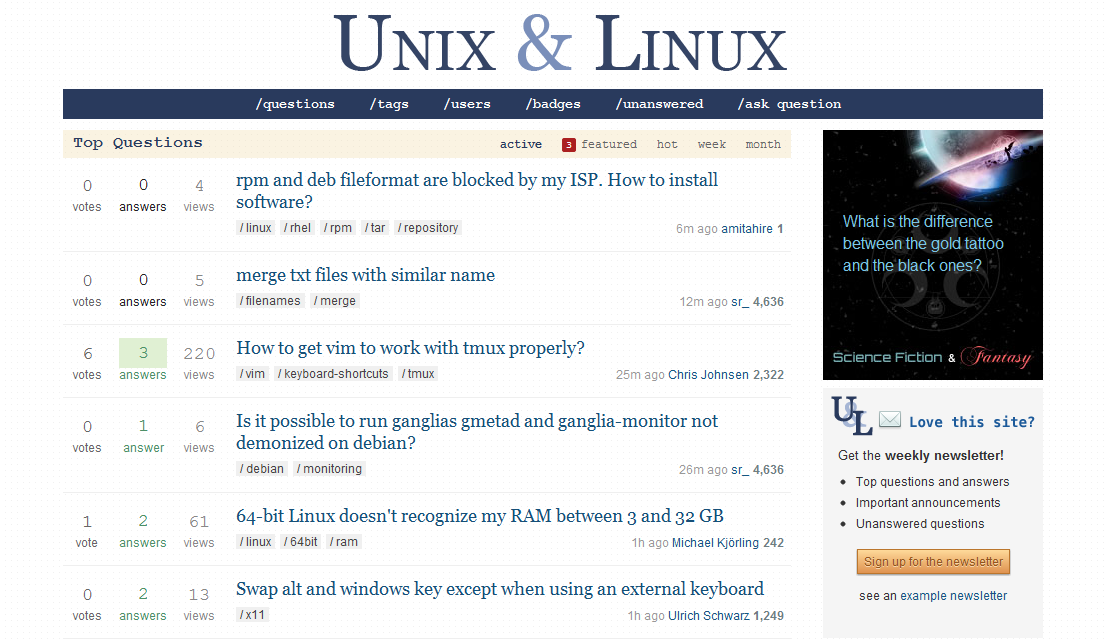 I am not active on Skeptics.SE, but I still want to chime in that I find this theme unaesthetic and more difficult to read. However, all of my specific complaints have been mentioned in other answers here, and I have upvoted them accordingly.

I feel like the area trying to steal focus is somewhat inverted. When I land on the page I'm drawn from the logo to then look at the more colorful and contrasting sidebar. I find it a bit difficult to put my eyes on the titles, especially when they have :visited.

My totally not actually tested idea of how eyes would move on the site once you land is this (at least that's how I seem to react): 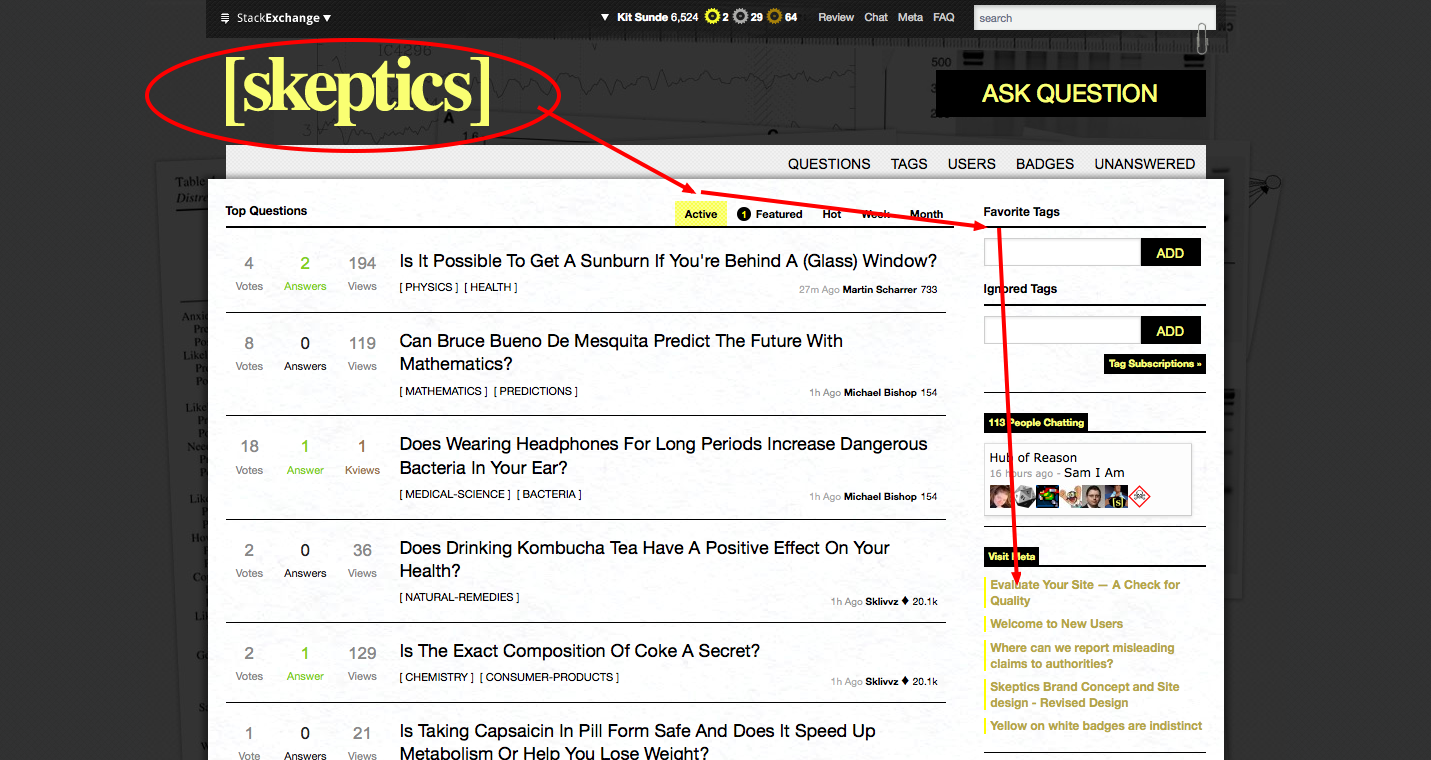 I also feel that the animation on the "ASK QUESTION" is so long that it distracts me from clicking it by making me notice it's doing a flashy animation.

I've played enough MMO's to know that people hates change (patches) until it's internalized, so I reserve judgment over the whole thing for another week or two.

Design looks nice but... Is it just me or it takes more than those 0.1 milliseconds to load? It can see the background before seeing the "white part" here where the content is located.

I just wanted to let you know in case. :)

Text in quotes is hardly distinguishable from normal text. What happened to the grey background? :|

I'm throwing a few more ideas out, I tried out some stuff and I'll just put an image of some changes up here: 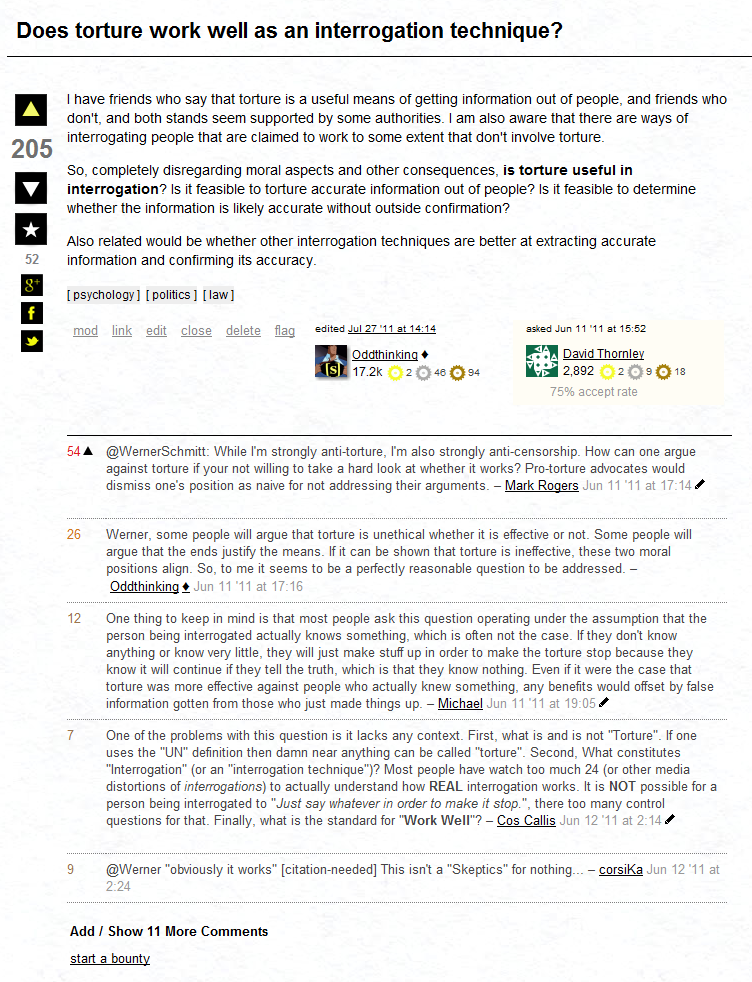 I did the following in this image:

I think the current horizontal lines are a bit heavy and distracting, and I'm not a fan of the all uppercase tags.

Another observation I made when comparing this theme with the new beta theme is that we have nearly no highlight color in the main content area. The new beta theme has blue titles, user names, tags, links and user card background. The new Skeptics theme has only the user card background in light yellow, and that is faint enough that I didn't even see it originally on a different monitor.

The whole theme looks very monochrome when you focus only on the main content area. I think some more highlights would help there, but the yellow/black color theme doesn't really allow easily for that as yellow is too light to be used for any text.

I've attached a comparison of the new beta theme and the new Skeptics theme. 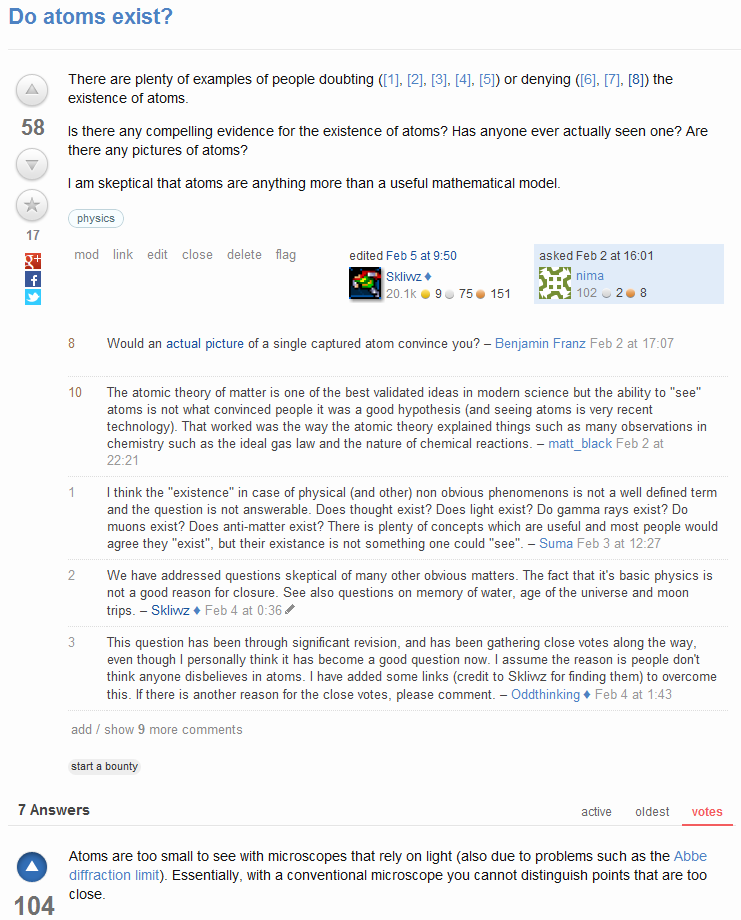 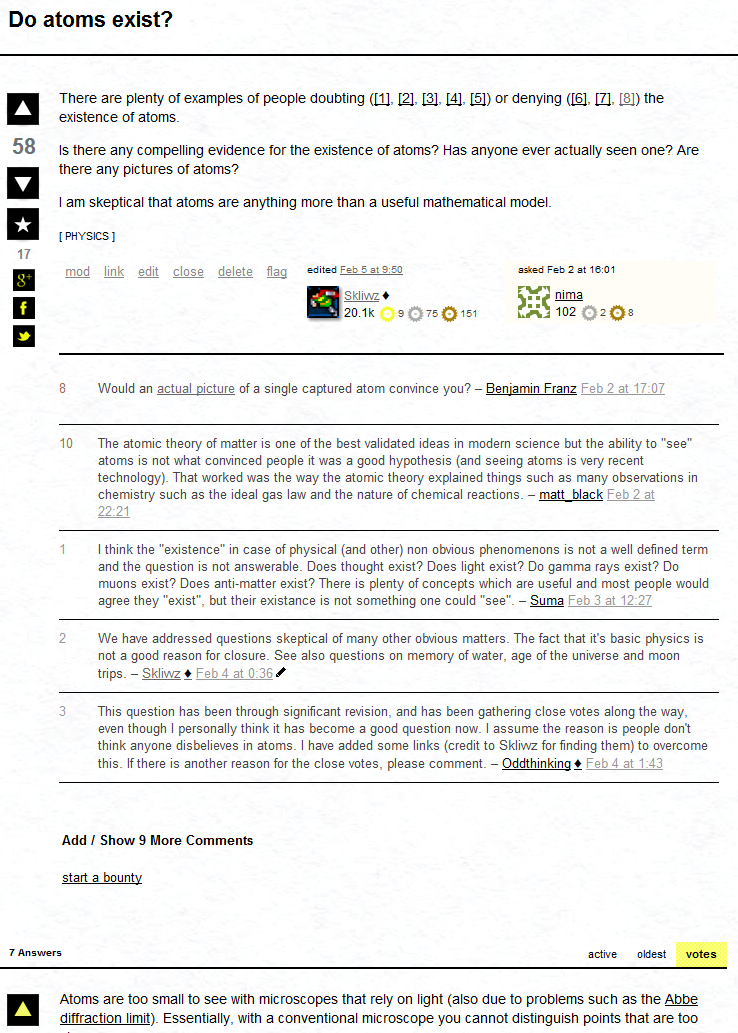 The problem with this design, the reason you still encounter significant opposition in spite of the many adjustments, is because it's still too reminiscent of the old conspiracy theory-themed design.

Sean put great attention to details in the original designs. The choice of font, the paper-looking dirty white background color of the central column, the squareness of the buttons, the big black line dividing section, excessive amount of whitespace, the understatement of links, etc. All of it serve to reinforce Sean's initial desire to represent the analog version of the site, "like the wall of a researcher or reporter trying to connect the dots on their fact finding mission."

Unfortunately, that mood was rejected by the community.

In response to the feedback, Sean removed the most glaring offending aspects of his design in the hope that it would make it palatable to us. Fair enough. If the design had been only slightly altered, that might have worked. However, the flaws run deeper. Sean clearly put a lot of time in this design, and since his intent is not compatible with the community's preferences it's still causing problems. Most of the negative reaction you see to the design are symptoms of this larger problem.

Another way to phrase the problem is that Skeptics' design looks a lot more like English's than Physics'. You would expect a site about scientific inquiry to share a lot more commonality in design with a site about physics than one about the English language.

English's is an exception in the Stack Exchange Network, not the rule.

When you look at graduated Stack Exchange site, most of them share this very polished, minimalistic and modern look. English does not. It breaks the rule for the right reasons, though. The design emulates a specific mood that is a solid match for a site about the English language.

The community does not desire special treatment. Quite the contrary, in fact, we want a design that is more in line with other graduated sites and the new beta theme.

18
Skeptics Brand Concept and Site design
12
Skeptics Brand Concept and Site design - Revised Design
10
Is the new design a keeper?
7
Evaluate Your Site -- A Check for Quality
9
Change the caveat banner on posts
4
What is the history of Skeptics.StackExchange?
4
Design Bug: Horizontal Lines between comments too bold
1
Design: orange vs yellow?
1
Questions have vertical misalignments