Should the Worm Regeneration question be split into multiple questions?

We currently have a slight controversy over a question about worms. The question asks if you cut a worm in half will it survive as two worms.

Most people would immediately interpet this question as asking about the most familiar type of worm, the Earthworm. Interpreted like that it is an untrue urban legend. However the legend is based in fact, in that some other "less traditional" types of worms do actually regerate.

The current thought proccess is that it might be reasonable to split this into two questions, that link to each other. One covering the urban legend version involving earthworms, the other asking explicitly about any type of worm.

Even the any type of worm question is something people would be skeptical about.

You could split it into two, but the non-earthworm one probably isn't interesting by itself.

Why not take the two answers for the two different questions and make a super-answer that merges it all in and becomes a definitive answer on the whole subject?

An answer to a question doesn’t have to be “yes” or “no”, it can well be (as in this case) “yes for some species of worms but no for annelids (in particular earthworm),” I don’t see any problem at all with this.

As such, I’m for keeping the question as is.

This is what I came up with as a "super-answer" It fuses the two answers that were given. Let me know if this looks good as an answer. I can post it as a community wiki, or someone else could post it for me. Let me know what you think.

Most people would immediately interpret this question as asking about the most familiar type of worm, the Earthworm. Interpreted like that it is an untrue urban legend. However the legend is based in fact, in that some other "less traditional" types of worms do actually regenerate. Therefore, I will address both.

(The information in this answer was taken and fused from Kevin Cathcart's Answer, and Martin Scharrer's Answer. )

Most commonly, this myth is about earthworms, not any kind of worms.

This story is untrue according to the Worm Farm Guide. The two half do not survive independently. However, the head part can regrow some fraction at his back end if it got lost:

You may have heard that you can cut an earthworm in half and both halves will grow back. That's not true. If an earthworm is cut in half, it will usually die. However, it is true that if a third or less of the posterior portion of the worm gets chopped off, the earthworm can usually regrow that portion - but the chopped off posterior will not grow a new head

This is also stated by the following sources:

What happens if you cut a worm in half?

Almost everyone wants to know the answer to this question. Some species of worms can regenerate, or re-grow, a new tail, if their tail is cut off. However, a worm cut too closely to its' head will have difficulty growing a new tail. Most worms will not regenerate a head.

Generally, we tell students that if you cut a worm in half, you will most likely end up with two dead pieces of worms. However, if you are lucky, the piece with the head may grow a new tail, so you will have one alive worm and one piece of dead worm.

Some worms have a natural reflex, in which they will eject their tail when the tail is pulled. For example, when a bird catches the tail end of a worm, the worm would eject or sever its' tail from the rest of its' body. Thus, the worm remains alive and safe, while the bird gets only part of the worm.

There is a common myth that has been around for a long time now that if you cut a worm in half, the two halves will grow into worms - making 2 worms out of 1. This is very untrue. It is true that if a worm loses part of its body it will survive, but if you cut a worm into 2 pieces, one half will surely die. The half with the saddle (the fatter, pink part) will burrow itself into the soil and survive. It is not a good idea to cut worms in half or any other creature for that matter - it is very cruel - so please do not be taken in by this myth and leave the worms whole.

There are some worms with extraordinary regenerative capabilities.

For example many species of flatworm categorized as "Planarians" which are well known for being able to regenerate into two individuals when cut in half.

The best general purpose reference on this I can find is a page written by Dr. Wolfgang Seifarth.

The diagram on that page show some of the regenerations possible for that species. It can also regenerate if cut laterally.

For a more rigorous reference, Various research into the causes of this effect has been summarized in a paper published in the Annual Review of Cell and Developmental Biology. An illustrative quote from that paper:

When a planarian is amputated transversely, two fragments are generated and are capable of regenerating (Pallas 1774; Johnson 1822, 1825). The term polarity has been used to describe the fact that an anterior-facing wound will regenerate a head and a posterior-facing wound will regenerate a tail (Morgan 1901). “Something in the piece itself determines that a head shall develop at the anterior cut surface and a tail at the posterior cut surface. This “something” is what we call polarity”.

Indeed not only can it regenerate a head, but in a few cases, it can accidentally produce one with a head on each end!

As for what they look like, perhaps this image from Wikipedia showing one of the two headed ones will give you an idea. 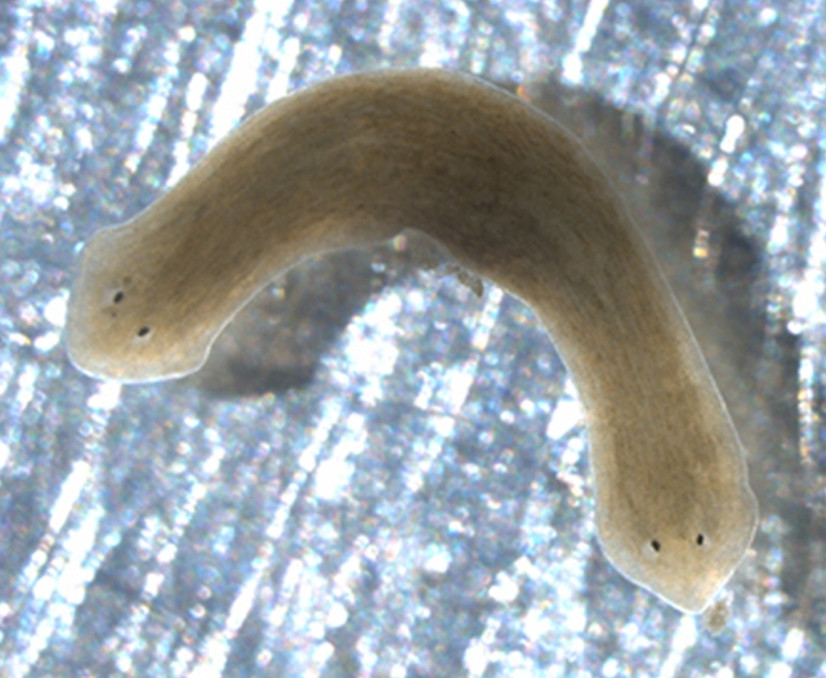 13
Politics, beliefs and motivations questions should not be allowed here.
10
US Election 2012 & Skeptics. We need your input!
3
What determines how close questions can be before being determined “duplicate”?
6
Do Literature and Religion questions count as skepticism?
10
Should we limit [quote] questions?
0
A “boiling” question
0
Deletion of an answer without good reason
3
Help writing good, on-topic questions
1
Should we increase the required question length of the quality filter to deal with Holocaust trolling?