Is the info graphic used in the Kinder Surprise question appropriate?

Recently, a question about Kinder Surprise eggs was asked that features a child holding an assault rifle (it is unclear if it is an AR-15 or M16 variant). This image seems to be touching a couple raw nerves given the current political climate in the United States right now.

There do appear to be other info graphics out there, such as the following, that would be appropriate to the question and not be quite as political. Perhaps this is something that we should swap out given that the gun control debate really doesn't' seem relevant to the question asked.? 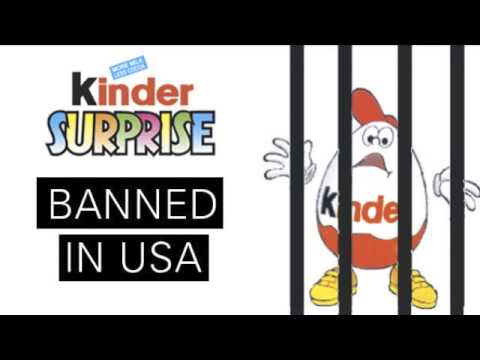 The original picture is advertising intended to make a point. Advertising is known for pushing boundaries, and exaggerating things. Why? Because advertising is increasingly ignored due to desensitization; we are burdened with hundreds of advertising images every day.

A comparison between a novelty toy and an automatic weapon is obviously unnecessary because many things are dangerous without being that dangerous. But the advertiser obviously chose that because of current affairs. It gets noticed and that's the whole point.

The goal of the advertiser is to get people to notice. It does not necessarily have anything to do with gun control, but it's riding the coattails of that issue to become noticed.

If people are objecting to the image simply because it's a hot political issue, then I would tell them to deal with it, lest they want to go down the censorship road.

In other words, if the image was a second-generation, or third-party image made by someone other than the company or individual making the claim, it could potentially misrepresent the claim or impart a different meaning than the original owner intended.

If this candy vs. gun image is from the source of the claim, then it is best suited to represent the claim in dispute.

We have a precedent: "Not Safe For Work" images shouldn't be censored, however, they should not be included as an image. Instead, a link should be provided to the image, marked as NSFW or trigger warning, so people can choose whether to view it (and to ensure that others don't accidentally get exposed to it).

In this case, it didn't occur to me that this image would be considered NSFW/offensive. It is an image I had already been exposed to via Facebook, and I didn't see complaints there either. If there is are people who are genuinely upset by it, or a real risk of people getting into trouble for accidentally exposing their coworkers to it, let's put it behind a warning link. But, is there?

Yes, it's appropriate. The asker gets to state the claim they wish to have examined, and they get to use whatever quote, link, image, or other source that they happen to believe shows evidence of the claim's notability.

I actually used that Image out of sheer flippancy. I'm not American so I guess I'm a bit removed from the political debate on gun control, and I appeciated the juxtaposition of the assault rifle alongside the kinder surprise. My initial thought was "Could it possibly be true that Kinder Eggs are banned where Assault rifles are (for the most part) not so".

In that respect, my question should probably have included the question as to whether the gun in the image was not banned.

In any case, the image proposed in this question is IMO bad - it is clearly not one making much of a claim - there is no reference, no author and therefore no significant claim. Who is it that is stating that Kinder Surprise is "banned"?

Sorry if it offended anyone. There was no malicous intent there. I'll remove/link to the image if that is deemed to be appropriate.

We often deal with claims that offend at least some people, that is not something we can avoid. If questions would have to avoid offending anyone, then we could never debunk e.g. racist claims.

The only case where we remove images and only link them is if they are NSFW, e.g. containing graphic violence.

The question clearly stated that it is about the Kinder Surprise part of the image, the weapon was not even mentioned in the text. So anyone starting a discussion about gun control is off-topic anyway, and we can just nuke those comments. If someone really wants to deal with the issue whether the gun in the image is actually banned in the US, they can open a second question about that.

If "Moms Demand Action" are a major promoter of this claim, and the claim was relatively unknown beforehand, then mentioning this in the question may be helpful, as an answerer may try researching if someone else has tried debunking this meme and mentioned the group "Moms Demand Action" in their debunking post.

It is much more shocking the one in the question, than the one here in the meta question. It is more controversial, and stirs up more discussion. I prefer it of that reason.

On the other hand if that picture is used, then it DOES bring up a secondary discussion. I really liked RedGrittyBricks original answer of that reason. Because it did answer the secondary question which the picture brings up as well, he did it calmly, neutrally with some statistics.

IF the picture in the question is used, it SHOULD also take care of the secondary discussion it generates, not just pretend it is not there.

IF you want to avoid that discussion because it feels off-topic, then it's more appropriate to use a less controversial picture.

Take the consequences of the choice of picture, that is what I think.

To follow on to what Oddthinking said with regards to the NSFW or offensive, I don't think the image is offensive or NSFW; however, it is intentionally shocking in such a way to make a point about the fire arms and that overall debate in the United States. While it is a good graphic to create a dialog about that, I'm concerned that it distracts from the question as it pertains specifically to the Kinder Surprise eggs.

Furthermore, the image itself is also a bit misleading since some states have banned the weapon that the child is holding. So from that standpoint the image is also slightly distracting because in the future some well meaning users of the site might try to post a response to both parts of the image.

11
On Not-Safe-For-Work images
3
Do claims have to be written or verbal?

2
Appropriate question: Are gold prices a bubble?
5
What kind of questions should receive upvotes?
1
When is it appropriate to migrate a question to another site?
3
Is deletion the appropriate action for answers lacking references?
1
Should the term “evolutionists” be used or replaced?
3
My Proposed Presentation for TAM2013
4
“Abusing the flagging system” - really?
1
Help me edit my recent question, please
2
Was there anything wrong with this question about Boris Johnson or its answer?
1
Is asking a question to validate/verify the real world origins of the practice of being a “Soupeur” appropriate for this site?