Should we maintain or expand the reasons for deletion of an answer?

This question is related to Should we increase the penalty for downvoted answer. I'm separating out the issue of expanding the deletion policy from the question of changing the reputation penalties for downvotes because it is a distraction to mix the two.

The current reason for deletion of an answer is listed at the FAQ, here:

Answers that do not fundamentally answer the question may be removed. This includes answers that are …

Additions that have been suggested

Wertilq, I am always hesitant to remove a severely downvoted answer that follows the rules. Just because someone draws a conclusion that may not be supported by the full preponderance of data, doesn't mean that it should be summarily removed. I am afraid that such actions would smack of censorship at worst. Also, it could provide an opportunity for an answerer to improve their answer if there is a dissenting viewpoint that someone may not have initially addressed in their question, or in the community voted answer.

Also, the severely downvoted answer may provide a source of another skeptical claim that someone can ask and answer, letting more people participate in the reputation process to reach this supposed state of nobility.

I do not support an expansion of the deletion policy. This simple criterion has served this site well: answers that do not fundamentally answer the question may be removed.

All other answers should be allowed to stand for judgement by the process of voting.

If an answer is poor, it will be downvoted. It will appear last in the list of answers. It will be greyed out. Visitors will know it is an untrusted answer. Its flaws will be explained in the comments. But, as long as it is an answer, it should be allowed to remain.

Bad answers can't be removed from skeptics, because of policies says mod shouldn't do it. And here on skeptics we don't have any high rep users not being mods.

Lets make a metaphor for skeptics, as a country. The high rep users are the rich and noble, and the low rep users are peasants. The Mods are the political party ruling the country.

The country have its political party running the country, but the party tries to interfere as little as possible, and only acts as a police if something really goes awry, or if someone is doing something inappropriate.

For morale, interference and guidance of the country, it's for the country itself to guide its members. They want the country members to vote for who is elected into the party, and which things the peasants may sell in the town squares.

The party have decided to not touch petty details like that, the country should govern itself. The party have too much power, and it could lead to potential abuse. 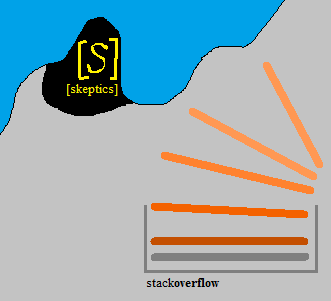 The problem for the little country of Skeptics is that it adopted the policy and ways of a much bigger country, and in that country there is so many people living that they have a thriving nobility on top of having a large party ruling the country.

Most people being voted in to the party, are the rich and noble, since everyone knows them, and they are rich so they must know what they are doing.

In a large country like Skeptic's neighbor Stack Overflow, that is not a problem, because the pool of nobility is large, and even without some of them there is still many enough left to handle setting policies, and guiding the country on what to sell in its market squares. 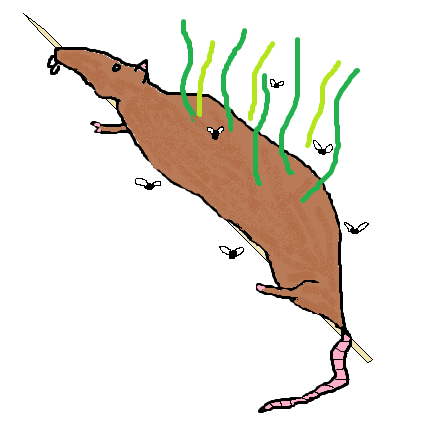 There is no Nobility in skeptics, all the nobility have joined the Party instead.

The Party have decided it should not intervene, and even if the party agrees no one want to eat Rotten Skewered Rats, and that it's despicable something like that is sold, they strictly follow the policy set by the large country of Stack Overflow, that works wonders there, and decide to not intervene.

To this day the small country of Skeptics have to stand by being the country that sells Rotten Skewered Rat, which no one is proud of, but no one is allowed to do anything about.

Even if it's against the policy of Stack Overflow for the mods to touch down-voted answers, Skeptics can't at the moment follow that policy since it simply is too small, and doesn't have high rep users to do that.

If an answer have -5 or less as score, it should be okay for the mods to delete it, but it's still up to individual mods to do it. The community have called out the answer to being bad, even though they get personally penalized for doing so. It should thus be the request of the community to remove such an answer, and the part.. err I mean the mods, should then be free to do so.

8
Shoutout to moderators: stop deleting flawed, downvoted and wrong on-topic answers
-1
Removal of answer on "Do Israeli soldiers kill Palestinian kids?"
-2
Should we increase the penalty for downvoted answer

2
The deletion FAQ item should reflect site policy
3
Is deletion the appropriate action for answers lacking references?
4
How do you succesfully challenge a moderators deletion of a question/answer?
5
Why my answer was deleted?
8
Shoutout to moderators: stop deleting flawed, downvoted and wrong on-topic answers
0
My answer was deleted for a bad reason
3
Deletion of my answer on the EPA Particulate Matter question
2
Is answering with fundamentally a recitation a third-party analysis of a claim acceptable?