Why are some answers marked “tl;dr”?

I've seen several answers that begin with "tl;dr" or "TLDR". I had to look up what this means. The Urban Dictionary says "too long; didn't read".

Examples (but not the worst ones, which I can't find again):

This seems like incredibly bad form to me. Aside from being cryptic geek-speak, I cannot tell who wrote it, or what it is supposed to communicate. I can imagine two possibilities:

2) The answerer wrote it to indicate that they are providing a synopsis of what they wrote. If this is the case, they should be writing in plain english.

My instinct is to delete this with prejudice. Is there any reason we should tolerate this at Skeptics?

addendum: This notation is clearly accepted among this community as a jokish Netizen idiom, so it is what it is. Having read the responses, I have these parting thoughts on the topic.

1) Many scientists make a conscious effort to avoid jargon when speaking with non-experts, (and even experts) based on the belief that it interferes with communication. They believe that gratuitous use of jargon ("fancy words") creates the impression of pretentiousness and exclusivity. Some have even attempted to quantify the amount of jargon, or created communication games such as Up Goer Five, to help train scientists in avoiding jargon (FWIW, I gave up when I discovered that "plant" was not an allowed word). Even aside from scientific jargon, many other writers have developed tools to help them make their writing more accessible. These issues were also discussed by George Orwell in his essay "politics and the English Language" (tl;dr) this stuff matters.

2) The notation "tl;dr" has been added to the Oxford Online Dictionary. I still think it's a fad existing within a narrow subculture, and it looks like some sort of misformatted markup rather than an abbreviation of a phrase. More than once, I've failed to communicate when I've used abbreviations like FWIW or BTW, even though those are the initials of words in common phrases. In contrast, the definition of tl;dr is extremely derived, and of recent origin.

3) Use of TL;DR at the beginning of a comment is probably not needed most of the time. That is also where I found it to be the most distracting/confusing. Many commonly taught writing styles emphasize that the first paragraph should contain a succinct statement of the thesis, so there is no need to warn readers that you are doing so. For instance: The Five Paragraph Essay, and the Inverted Pyramid (journalism)

p.s. I feel like this rant should go on my personal profile page, but that doesn't seem to be how things are done here.

I agree that we should just use plain english and summarize. A good summary in an introductory or concluding paragraph will make it clear that it is a summary. You can say "In summary,", or just even just state the summary without saying that it's a summary.

Even if this is a well-understood acronym by some people, it's not as widely understood as "in summary". We should strive to produce better content than the rest of the internet.

However, it's too minor an edit to justify on its own (i.e. going through all answers to remove TL;DR). If you're making more substantive changes to a question or answer that includes "TL;DR", go ahead and fix it at the same time.

You haven't linked to any specific questions/answers so its hard to generalize but I see this usually on answers where the actual answer is long (often by necessity) and the author wanted to give a short answer at the very top.

It usually means "This answer is long, but if you're the cliffs notes sort of person read this one liner for the answer"

I don't personally see it as rude, that's probably because I've done it myself. Lets see what others think.

TL;DR means Too Long; Didn't Read and is Internet slang for summary. It's self-deprecating humor, which is common in "hackerese". The joke is that if you, the reader, think that the answer is too long and don't want to read, the following paragraph is the executive summary.

There is no need to burn it.

It’s common jargon on the internet. I generally agree about using plain English but trying to stamp out internet vernacular on the … internet is (a) a lost cause and (b) not worth it.

Finally, “tl;dr”, when used on this site (and elsewhere) carries none of the connotations you seem to associate with it. Etymologically it once did (and in some discussions may still). Usually it’s imply a synonym for “summary”.

I've typed TL;DR it to synopsize my own answer, because I've seen other people do it: a sort of in-joke. I'm not proud of it. If I want to do it again, perhaps I should use the word "Summary" instead.

Summary: the claim is true because bar and baz.

You can tell who wrote what (the original author, or someone else) by looking at the questions's or answer's edit history. 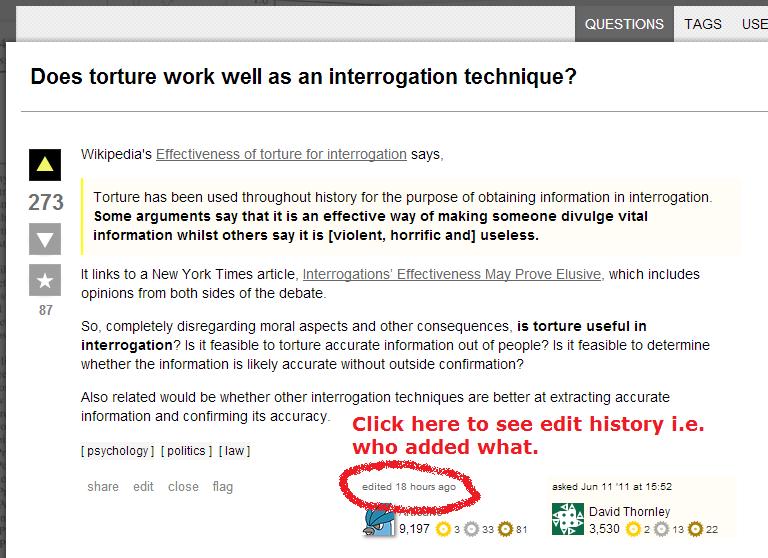 Questions may be edited by anyone. Please help create a wonderful library of questions in readable, proper English that all future visitors can enjoy.

Do not downvote for grammar. Instead, salvage useful questions and vote to close the hopeless ones.

When you see "TL;DR -- OMG -- LOL" this sort of thing, just fix it! The site will look so much better. If you are challenged with an edit war on grammar, don't perpetuate it to force your version, retreat to comments or meta and await reinforcements which are sure to arrive.

That means if you see "TL;DR:" you may change it to "Summary:" or some other appropriate word, and perhaps also fix these if you see them:

An example that is fine if you are tweeting from a cell phone to your buddies:

Here I'd imagine this is actually an acceptable question, to be edited to:

Did the Mars Rover photograph this Squirrel or Rat on Mars?

It might then be closed as duplicate or answered

Not the answer you're looking for? Browse other questions tagged discussion standards .

2
Exactly what questions are allowed in the site?
10
Can the quality of a question be judged by the first word in the title?
2
New User - I'm a bit unclear about anecdotal answers
0
Should question titles be bowdlerised?
8
Shoutout to moderators: stop deleting flawed, downvoted and wrong on-topic answers
7
Should answers without links be automatically marked as unreferenced?
2
Two similar questions, one closed, one open, why?
2
Why are there no mechanisms in place to avoid obviously false answers from being upvoted and coming off as legitimate?
3
On what basis were the answers classified as original research?