Should a person who is more qualified be subject of less skepticism than one who is not?

I have this question for several reasons.

First, the fact there are several persons with PhDs who are considered to be genuine academics, yet write completely unproven, unsubstantiated papers. This is especially the case with the so-called Postmodernists, but has been a problem with a lot of Social Sciences and Humanities for a while.

Second, the phenomenon of "truth by consensus". For example, in the case of Climate Change, a very common argument defending it is that 90-something percent of scientists agree that it's occuring. Which is completely irrelevant and is in fact a fallacy, since the only thing that matters is actual evidence.

And third, it seems to be widely assumed by the general public that scientists are immune to pride, greed and political thinking. The thought that one's theories being discredited means no research funding or that being famous in the field means running your own research rarely occurs to anybody.

All of the above is of course purely my subjective perspective, which I am not at all confident in, hence me asking this quesiton.

Accepting the word of an expert, without challenge, is falling for the Appeal To Authority fallacy.

The appeal to authority is a logical fallacy because authorities are not necessarily correct about judgments related to their field of expertise. Though reliable authorities can be correct in judgments related to their area of expertise more often than laypersons, they can still come to the wrong judgments through error, bias, dishonesty, or falling prey to groupthink. Thus, the appeal to authority is not an argument for establishing facts.

Here at Skeptics.SE, we are looking for definitive answers to questions. Wherever possible, our answers should avoid appeals to authority.

Humans have limited mental budgets for establishing the truth of each claim. It is understandable that, for example, a politician will need to delegate the task of finding the truth of each claim to a set of expert advisers, rather than become an expert in every area themselves. That introduces a risk that the expert doesn't do an expert job, but they are more likely to have a correct view (based on their research) than a layperson unfamiliar with the subject.

(From a Bayesian point-of-view, we should spend less of our limited efforts challenging the claims of relevant experts, as it has a lower chance of being fruitful in discovering an error. This attitude does not seem common amongst Skeptics.SE members.)

Occasionally, at Skeptics.SE, we get questions which we can't hope to answer with meta-studies of peer-reviewed experimental evidence, and we are forced to fall back on quotes from authorities - checking that they are indeed experts in the fields under discussion. Of course, answers with empirical data should, in general, be upvoted over appeals to authority.

Before I would comment on postmodernism, social sciences and humanities, I would expect you to be more detailed about your concerns, rather than a broad slur.

I didn't understand your third point at all. It is not hard to find members of the public accusing scientists of greed and bias. Indeed, it is not hard to find examples of bias in science. The important point is that science works towards uncovering the results of bias and overturning them so that, slowly but inevitably, the truth about the world is revealed. (Notably, the biggest source of falsehoods in science being discovered is other scientists.)

Not all things an expert says are reliable. People are wrong all the time, or victim to bias, even when talking about their field of expertise. Furthermore, sometimes people are quoted out of context making it seem that they have said something they didn't. 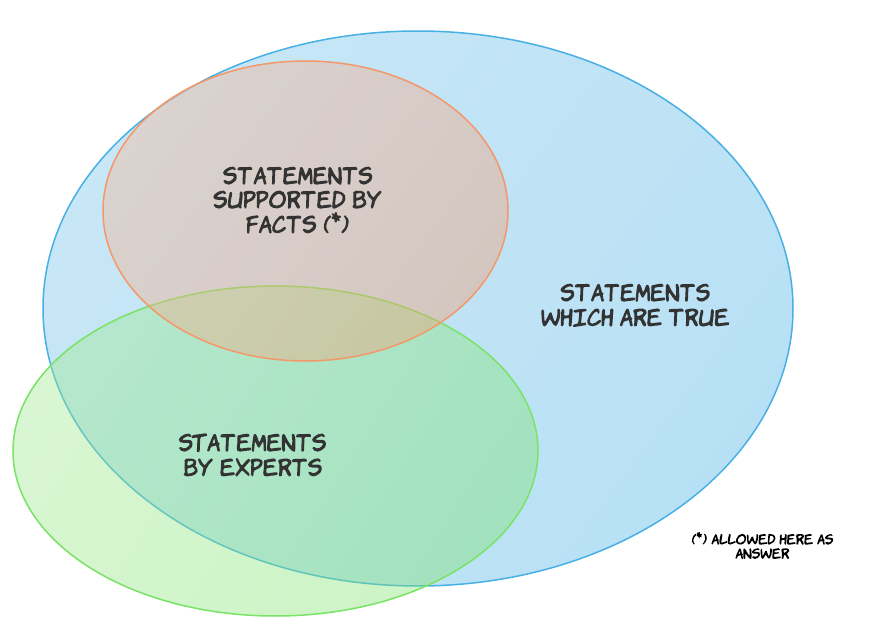 Clearly, statements by experts in a field tend to be more trustworthy than non-expert statements because experts have informed opinions. On the other hand it's easy to notice that experts tend to accompany reference and facts to their statements, making applying skepticism trivial in many cases.

In other words, the same amount of skepticism is required, but it's probably simply a matter of reading a footnote.

Regarding your statement about scientific consensus: consensus is relevant because it is related to evidence. That's the point of science, scientists accept evidence, in large part -- for example in the case of Climate Change, the consensus is around facts, and scientific criticism comes mostly from non-expert scientists and is based on principle and not fact.

Firstly, nobody here has every claimed (to the best of my knowledge) that professionals should be (or are) subjected to any less scepticism than lay people – at least not on the face of it.

The advantage professionals have is that they can find relevant resources much faster, and may be able to relate them in non-obvious ways.

Now about the truth by consensus. In fact, a scientific consensus is highly relevant to the way science is conducted. Quite tautologically, this is how a truth becomes established in a scientific field: by consensus. Now a majority vote of course doesn’t establish “truth”, but it does establish what’s considered as truth at a given moment.

To give a current example: recently, a controversial paper established a new, ostensibly very simple protocol for generating pluripotent stem cells from ordinary tissue. After a short, euphoric period in which nobody could find any obvious flaw in the paper, people soon realised that the paper was (at least) vastly overstating its promises. By now, most people in the field have become convinced that the findings were either a fluke or outright fraud. But keep in mind that only very few people have actually tried replicating the findings. All the others take their word for it, and accept the majority vote. The relevant part here is that for us there is no way, except by consensus, to judge the evidence here: both the initial paper and its detractors present evidence which may be true, or may not. Short of going to the lab and doing the experiment ourselves (which may still fail for a multitude of unrelated reasons), there is no way, except by majority vote, to assess the truth.

The same is true in the case of climate change. The consensus on climate change doesn’t establish it as true. But it is still a relevant piece of information in a debate among lay people: lay people, by definition, cannot fully assess the evidence themselves, and evidence can be (and is) presented in highly misleading ways. The fact that almost all climate scientists agree on how to interpret the evidence is therefore highly relevant in a debate. To pretend otherwise is merely a variation to giving undue weight to minority opinions and violates the neutrality of the debate.

1
Should we duplicate answers if they work for more than one question?
2
Why was my question edited many times removing text that I put on purpose?
1
Criticism of handling
14
Are moderators ruling out good answers based on basic physical principles and facts as theoretical?
2
Was there anything wrong with this question about Boris Johnson or its answer?