What should be done in such a situation to address it effectively?

It seems that 100% of actions I'd consider as possible are either wrong or not effective (based on my extensive practical experience on this site and SE overall):

I think the second-last suggestion is best. You can write a small new answer which says something like,

One detail that X didn't mention in their otherwise-excellent answer was Foo.

Foo is referenced at Bar and it's relevant because of Baz.

I disagree with Oddthinking's answer and recommend not reworking X's answer, because:

This type of supplementary/auxiliary answer is very common (IMO) on the software programming forums.

The problem here is balancing out what a user think is wrong, and another thinks is right. If there are no references, moderators can intervene.

If it's a grey area, I'd say leave a comment. Yeah, it won't work, but it doesn't matter. Your correction is there with the answer now.

Comments do influence votes, and sometimes authors actually... correct their answers. Frank but courteous feedback, focused on the matter at hand seems to work best: never say "you are wrong", but "this sentence is wrong" (or unsupported). Beyond that, we can't really "fix" all answers because, in many cases, there are tons of things on which we disagree, and no one is the wiser -- even though we all think to be honestly right!

Of course if it is true that a small particular invalidates the whole answer, then point out the mistake, downvote, flag for mod attention and move on. I think it's best if a diamond mod or a community manager takes the blame if we have to edit out something a bit atrocious that the OP will possibly resent or delete the whole answer.

Write your own answer. If it happens to be a copy in part or a derivative of the lower quality answer (and it doesn't necessarily have to; you can do your own work de novo) give credit, but that is all the creative commons licence requires.

Writing a good answer is never a disservice to readers. In the long run, it will get up voted so that readers that don't have the time or interest to read two similar answers won't. Those that are interested will. Your answer should stand on its own as a response to the question and not be a response to another answer (because the other answer might change or be deleted, among other reasons).

Here is an excellent example of the use of an alternative answer to address issues with the original answer: Were Mermaid passengers shipwrecked by 5 different vessels before being successfully rescued?

Both answers are interesting, well referenced, and stand on their own. Reading both gives insight into how the original answer perhaps got the wrong conclusion, and even into how the myth originated and was perpetuated.

Also, flag the low quality answer for the moderator to add the "some parts of this answer need additional references" banner to warn readers that not all of its assertions are well supported by evidence. Eventually, the mod can delete un/under-referenced material. (This is assuming that the material and its references don't meet this site's standards. If they do, then ignore this paragraph, but then I don't understand your question's premise.)

Be bold, create good content, and trust authors to have released their work under a creative commons licence willingly so that you can leverage their hard work to make better things.

Ideally, a good question (even if it flaws) should be upvoted and a bad answer should be downvoted. Simple. Upvotes and downvotes are irrelevant when you have flaws in a good answer. You can hold your vote until the problem has been resolved, then decide later. At worst, you can not vote at all.

You go on saying:

Informing the poster, as noted in the preconditions, was not effective.

This isn't true. Notifying the answerer via comments and telling him what is the weak point in the answer works. If the comment was effective, it will be upvoted and there you have made a successful notice.

Informing the poster politely is the most effective way to deal with a good answer having flaws.

I wrote an answer on this question, it was okay but had a vague part, so this is what the moderator did, and in few minutes the weak part of the question was fixed.

If answerer opposed the commented suggestion due to honest intellectual disagreement or due to nastiness, then you can downvote the answer and walk away. It is not your answer and you have no right to force your views on the answerer.

Was a pair of handcuffed hands found near the World Trade Center after 9/11?

I referenced the one single source and the official report of the events leading up to the September 11, 2001 attacks; it referenced 900 articles inside. So, I concluded inconclusive. Members disagreed with the conclusion since I am examining only on source, I opposed their commented suggestion since I didn't agree with them and I told them to downvote my answer and walk away if they don't agree with my conclusion.

Flagging for moderators is a wrong action since the bad content is not moderator-action-awful grade.

Irrelevant to post this point. Flags should not be used to indicate technical inaccuracies, or an altogether wrong answer. I've done that once, and received a decline:

Posting your own counter-answer which is a clone of full original answer with bad nugget fixed seems at best awful and at worst plagiarism.

Agree. You shouldn't copy the answer's answer and post it as your own or post a similar one that show similar sources, main points; it would be unoriginal. I rarely see that anyway on skeptics.se.

If you want to post a follow to up the answer, and add new value because you disagree with the conclusion or some point of the answer, then this is fine; since you're not copying the work but adding an additional value to it.

Did Pope Gregory IX call the Holy Fire a fraud?

I have digged many books to find the original source of Pope Gregory IX letter which I posted in my answer.

I have concluded that it is true and my answer was ticked. But later ChrisW found the letters, translated them and added a new value to the answer: 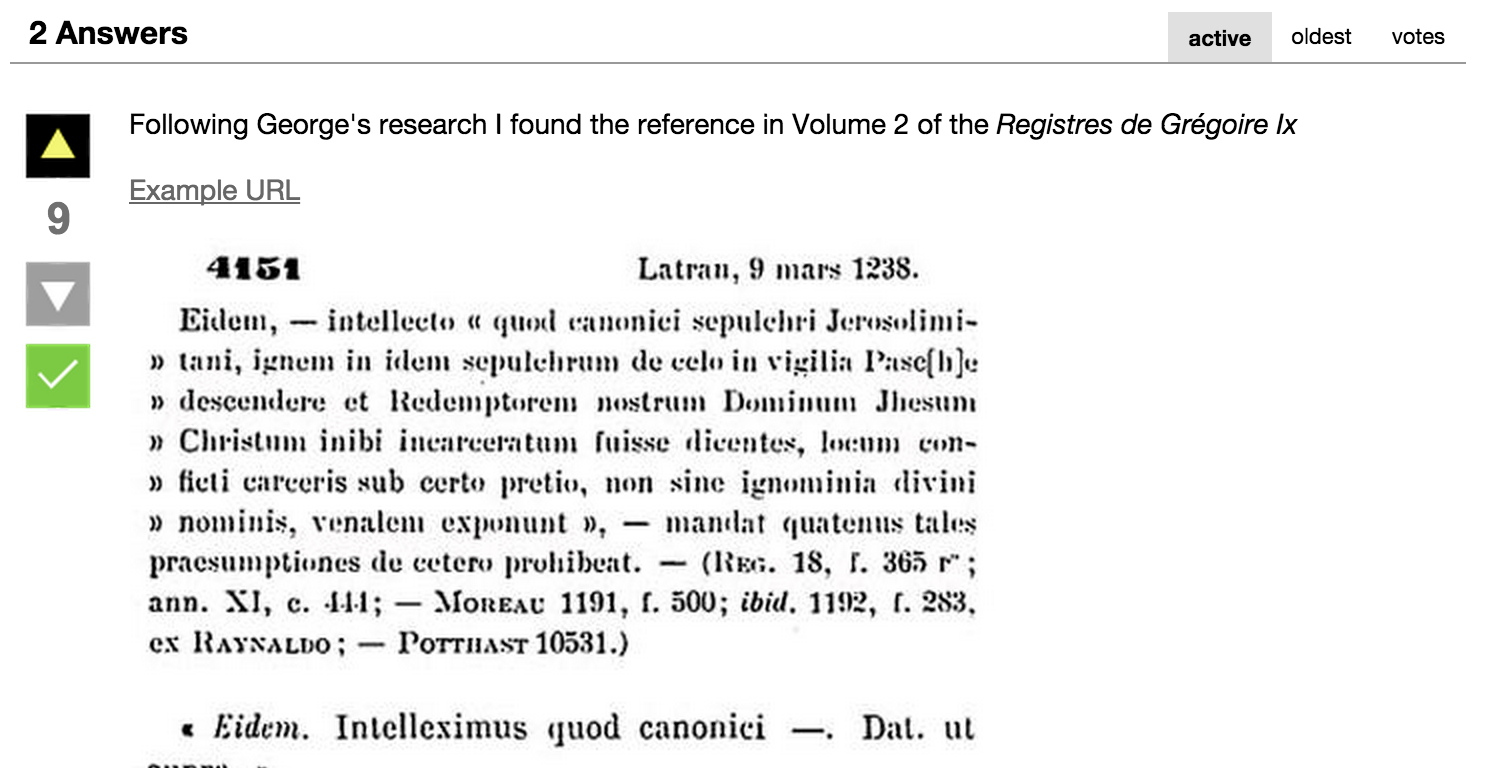 So, I changed my conclusion:

Takeaway: If you notice a good answer with flaws, do the following:

I personally think the last suggestion is the best.

Post your own answer, based on the original. Openly, proudly, acknowledge your sources. Use quote marks so you are not claiming the work of others.

When Stack Overflow/Stack Exchange started, it was suggested that you should consolidate several answers to make a better one. [citation-desirable]

The acceptability of copying answers is discussed here.

Not the answer you're looking for? Browse other questions tagged discussion moderation quality .

1
Should answers that are constructive but don't fully answer the question be downvoted?

2
Should we insert “citation needed” notices in-line, as opposed to or in addition to referring to an entire post?
1
What to do with an answer which is bad except for one line where it gives a good source?
2
Avoiding Edit Wars
0
My answer was deleted for a bad reason
0
Deletion of an answer without good reason