Two similar questions, one closed, one open, why?

Here are two very similar questions (and even used the same picture):

One is closed, one is open. Why?

Below is a copy of the two questions for convenience (since questions get erased from time to time):

Question 1: Is this a photo of Margaret Hamilton standing next to Apollo Project code that she wrote? 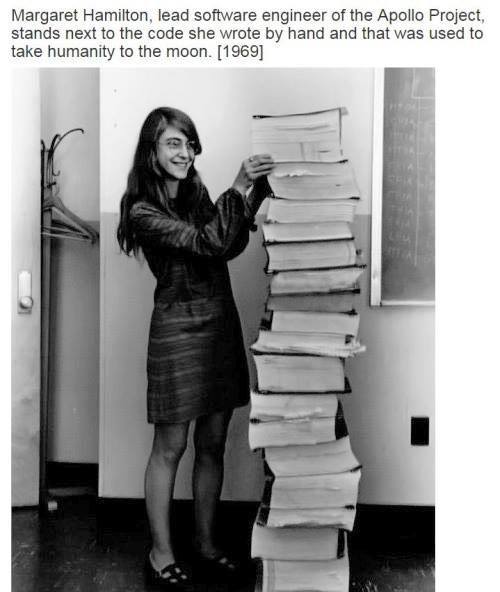 Margaret Hamilton, lead software engineer of the Apollo Project, stands next to the code she wrote by hand and that was used to take humanity to the moon. [1969]

Is it true that:

Question 2: Was this pile of code written by a single team of software engineers?

[This is a] picture of her next to the code she and her colleagues wrote for the Apollo 11 guidance computer that made the moon landing possible. [..] To clarify, there are no other kinds of printouts, like debugging printouts, or logs, or what have you, in the picture.

Was this pile of code really written by a single team of software engineers?

The second was closed when it became about a non-existent claim:

I'm voting to close this question as off-topic because there is no claim that it was written by a single team of engineers. – Sklivvz♦ Aug 7 '15 at 18:27

Before then, when it was about the caption, it was left open. It did contain, however, a lot of speculation about font size and other irrelevant stuff, which is what the top comments are about.

The first question is merely about the caption, and as such it is opened.

Not the answer you're looking for? Browse other questions tagged discussion close-reasons .

1
Why are so few questions left open?
9
Why is the mass-shooting question locked/closed?
1
Why is the Charlie Brown question closed?
5
Where should I put pointers for potential answers?
2
Why my UFO question has been closed and removed?
2
Was there anything wrong with this question about Boris Johnson or its answer?
1
Should we increase the required question length of the quality filter to deal with Holocaust trolling?
3
Closed because it lacks focus. But there's only one question. What to do?
3
Community Ads for 2021