Want to improve this question? Update the question so it's on-topic for Skeptics Meta Stack Exchange.

I hate posting meta things like this because I honestly doubt it changes much, but I just want to bring Oddthinking’s behavior on a question I posted nothing short of bullying behavior on a part of a moderator.

In 1982 did then President Ronald Reagan send a letter to an 8-year-old kid congratulating him on getting a Pac-Man high score?

And I was completely taken aback by Oddthinking’s complete reworking of the question based on one simple comment exchange. Upon seeing their edits, I immediately rolled them back. They clearly reworked the question enough to make it fall into an edit that veered from my original post’s intent.

‘I guess you missed my comments. I really had a problem with your “improvements” that clearly changed the focus on the question from being the Reagan letter to the plausibility of the high-score. As I clearly state in my question this is not about the validity of the high score but rather the claim that Ronald Reagan sent a congrats letter to Jeff Yee. Past that even if I do agree with your “improvements” the edits were quotes that were so badly formatted and attributed that they are shocking—at least to me—they were made by someone with mod rights. Please do not edit like that.’

To which I also added the postscript comment of:

‘And please let me know when you have read that comment so I can delete mine. I think the previous comment thread about this—and this new incarnation—should be gone.’

And thought it would pretty much be settled. To my surprise I see not one response, but THREE comments chastising me.

While I did end up editing the question to clear up citations—which I think is a fair criticism—their overall tone, tenor and behavior come off to me as someone who is an enthusiast of the site but was given mod privileges too soon. Simply put, Oddthinking’s behavior is really trollish.

Again, I am posting this here not because I want to debate this ad-infinitum. But my feeling is of Oddthinking is a mod and behaves this way? They should not be a mod.

The concept of this Stack Exchange site is great and useful. And requires diligence to keep things on an even keel. But please, there are boundaries and there are limits.

Screenshot of comments for the record below: 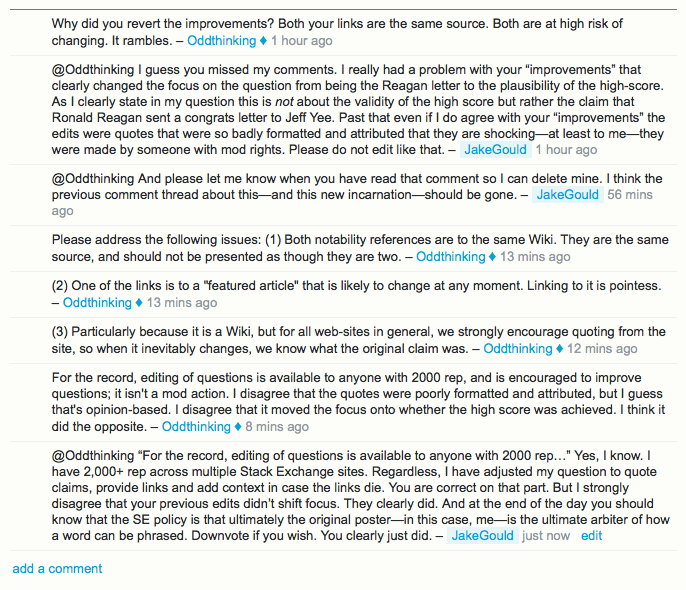 When I read the text from my perspective, I see no sign of bullying. I acknowledge that tone has always been difficult to convey over email, and you are seeing it differently. A key part of our Be Nice policy is assuming good intentions. I would encourage you to re-read our interactions, but with the assumption that I am genuinely trying to help improve the question.

Here is what I did, from my perspective.

I saw your question. It had some problems, so I edited it to improve it. I didn't do that wearing my mod hat - it isn't directly the role of the mods. I did it wearing my regular user hat: it improves the site to have high-quality questions, and that is the responsibility and role of every user. Even first time users are encouraged to submit edits to improve posts.

We can see the edits I made here: 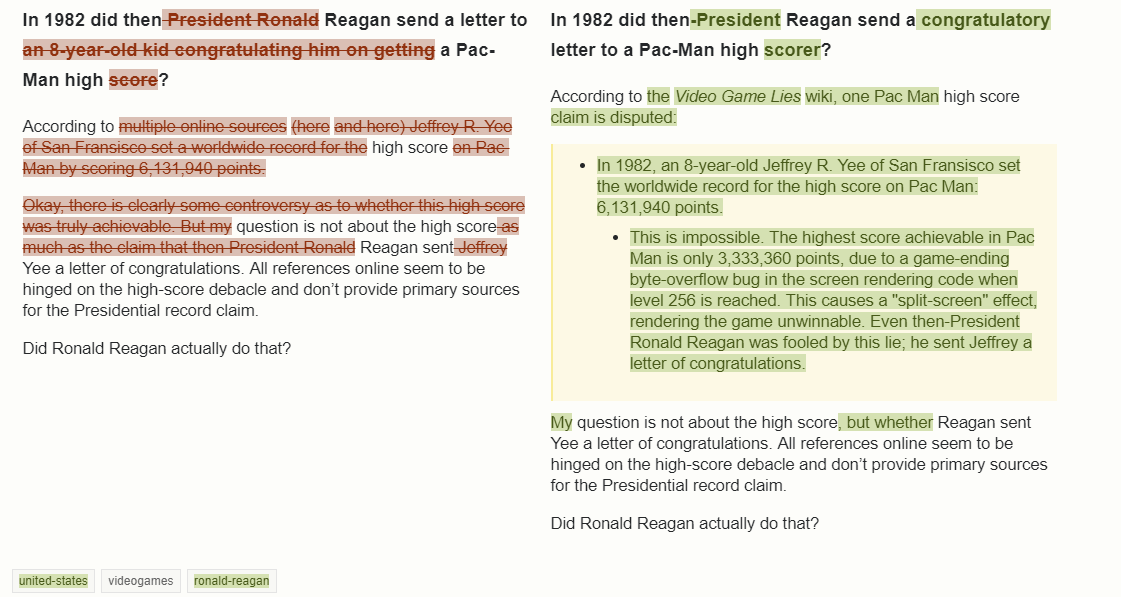 I think all of those changes are worthwhile and defensible.

I did not make any of them in response to the (now-deleted) comment suggesting you change your question to to be about the high score itself, but I responded to that comment showing why it was not necessary, and that my edits made that clear.

In response, you posted and then deleted a comment that I didn't notice, and reverted my edits.

I didn't get into an edit war. As a mod, I could have forced my changes and prevented you from editing, but I didn't do that either. Instead, I asked you why you reverted it, pointing out the key issues.

Your answer accused me of overstepping my mod powers and of making a bad edit. I responded with a list of specific problems that should be fixed. (Yes, the list was longer than one comment worth, but you acknowledged they were on point.) I defended against the claim that I overstepped by pointing out I hadn't used mod powers at all. I expressed by disagreement about the bad edit claims, but acknowledged that that was (just) an opinion. I again, didn't use any mod powers. [Oh, except to read the comments that had since been deleted.]

I am unhappy that you are unhappy, but I believe that my behaviour was fine and certainly not trollish.

The accusation that I got my mod powers too early is an unfair supposition, unsupported by history.

I am sure the other mods will read your complaint and haul me over the coals if they think I was being unreasonable. Again, if you still have an issue with me, or any mods, please contact the Stack Exchange Community Manager via the link above.

4
What is the history of Skeptics.StackExchange?
0
Enabling mods to really act as users: make "different hats" more visible?

1
Could we please be better at preventing discussions from becoming non-constructive?
5
Should there be a guideline to inline URLs?
1
Why was this referenced answer deleted?
2
Is this history-related question suitable for Skeptics.SE?
4
"Abusing the flagging system" - really?
3
How are we to discuss improvements when comments on contentious posts are being "nuked without warning"?
0
Enabling mods to really act as users: make "different hats" more visible?
6
Using skeptics.SE as a personal, political blogging platform