I saw in the reputation dropdown a -2 for this site.

On inspection my reputation tab looks as follows. Both of my positive reputation entries come from approved edits - how can these be affected by user removal? 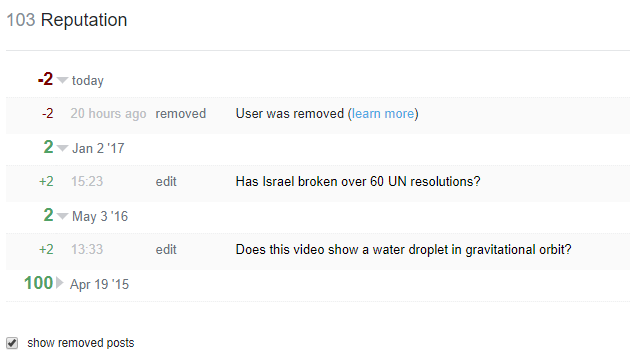 That suggested edit was approved and you earned 2 rep for that.

Now a relatively low-rep user account was deleted and the rep-gain for the approved edit was reversed, as it was approved by that now removed other user.

As explained here, on Meta.Stackexchange: How does "Reputation" work?

The account of a user who was the final approver of a suggested edit you made has been deleted (reputation page shows the cause as User was removed): −2

Not the answer you're looking for? Browse other questions tagged support reputation .

1
Why can I no longer suggest edits?
3
How does the meta reputation work?
0
Why did I lose 20 rep?
5
How should new users get started with Skeptics?
0
What Does "User was removed" mean?
2
Any followup to bad edit approvals?
5
Help us with a little clean up!
6
Using skeptics.SE as a personal, political blogging platform
7
Why was an answer about fracking deleted?