How do you skeptically investigate Hitler's religion?

I ran across the following question on main:

On one hand, the question is formally a skeptical question, on the other how can one prove that Hitler was a Christian or an Atheist?

He did write that he was a Christian - however his actions were certainly contrary to the Christian religion. Both are conflicting evidence and thus, probably, not very useful evidence.

As such I suppose that that question to be closed as off topic or subjective and argumentative:

Skeptics - Stack Exchange is for skeptics, rationalists, free thinkers, or anyone who questions pseudoscience. Skeptics is about applying skepticism — it's for researching the evidence behind the claims you hear or read. It is not for philosophical discussions about skepticism itself.

Should we allow questions that don't have a reasonable way of investigating the claim?

Which makes this perfect fodder for endless philosophical arguments. Which, as you note, is not what Skeptics is intended to host.

"Did Hitler refer to himself as Christian in his public writings?" - that's a question that can be objectively answered. Or "Did he call himself an atheist ... ?", if you prefer it that way. Any question on this topic is going to attract noise and controversy, regardless of how much concrete historical evidence can be provided - why make this a battleground for questions that can't be resolved?

Of course we should. As I said before,

In fact, thorough answers explaining the debate and why there is uncertainty make great answers. We are a site dedicated to seeking the truth. As such, there are many times where the answer will be "we don't know." It's unavoidable.

The question about Hitler's religion (or lack of thereof) will be a test for the moderators and the community, but if we remain skeptical and maintain our high quality standards, all should be fine.

It's not subjective. It can be analyzed, and there are wrong answers.

I’m not sure if Hitler’s religion can be investigated skeptically … and even if one could, he clearly made directly contradictory statements in different contexts.

Ultimately, I for one don’t think that it matters.

But other people do think that it matters and use this to make vitriolic arguments. People (ahem Glenn Beck ahem) claim that Hitler committed his atrocities because he was atheist, and use this example to justify their claims that an atheist society cannot function. Their claims can, and should, be investigated skeptically. And that entails dealing with statements Hitler has made about the faith he holds.

No true Scotsman … that’s a fallacy. And furthermore it’s highly debatable: after all, was witch hunt un-Christian? And didn’t the Jews kill Christ? This isn’t a skeptical argument, it’s an argument about doctrine.

What if Hitler told the Christians and Atheists things each wanted to hear from their leader?

What if Hitler went in one building or another on Sunday, or Saturday, or whatever?

Does this prove he was one or the other? No.

I could argue Hitler is a Mormon.

But you know what, I'd rather not.

You might look for baptismal certificates... authentic speeches or letters he wrote... but I suspect this is going to be such a mine-field of bologna that not even Mussolini could have had produced. And people probably aren't going to argue it that way... but wait a bit to see this degenerate before killing it.

I guess it is an interesting question, but I agree it is unclear. There are 4 possibilities I see for a serious answer:

The endless discussion might be made by discussing the real scottsman question, yes, but for the questions above, you could or could not find prove or disprove:

Conclusion: The question could be threated in different ways. Some of them would be, in principal, open to objective prove. Whether the prove can be made, or can't, because of missing documents, is another question, which to answer beforehand rules the whole purpose of the side senseless, wrestling.

How is this different from any other Christian (or religious person) in todays day and age? If you ask any member of the leaders in the US Religious Right about their faith, they will absolutely proclaim they are Christian, however the actions they display in the halls of Congress would seem to indicate they are not. Cut off aid for the poor, not treat the sick, etc.? I thought their jesus godfigure said to DO those things.

Or as Colbert observed: 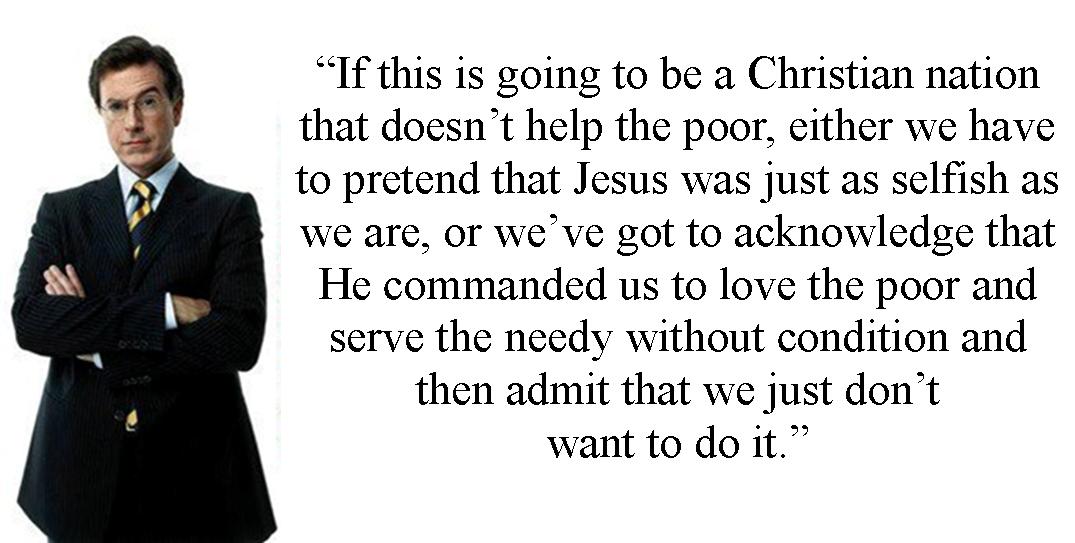 Not the answer you're looking for? Browse other questions tagged discussion asking-questions off-topic .

14
Politics, beliefs and motivations questions should not be allowed here.
10
Should we ask questions that don't have answers?
8
Closing is replacing downvoting

4
Are questions about the James Randi Educational Foundation on-topic?
8
Closing is replacing downvoting
6
Template of email for contacting notable Skeptics
4
Should the question asking instructions be referring to "scientific skepticism"?
14
Politics, beliefs and motivations questions should not be allowed here.
2
What the hell is wrong with my question?
4
What topics are in and out of scope of Skeptics.SE?
3
Improving the FAQ