What does it take to prove that statement on a data website is notable?

For example, Schmuddi argues that Knoema.com is "not notable". If I google for "Spain number of deaths", it's in the first page of hits on Google (4th ranged link): 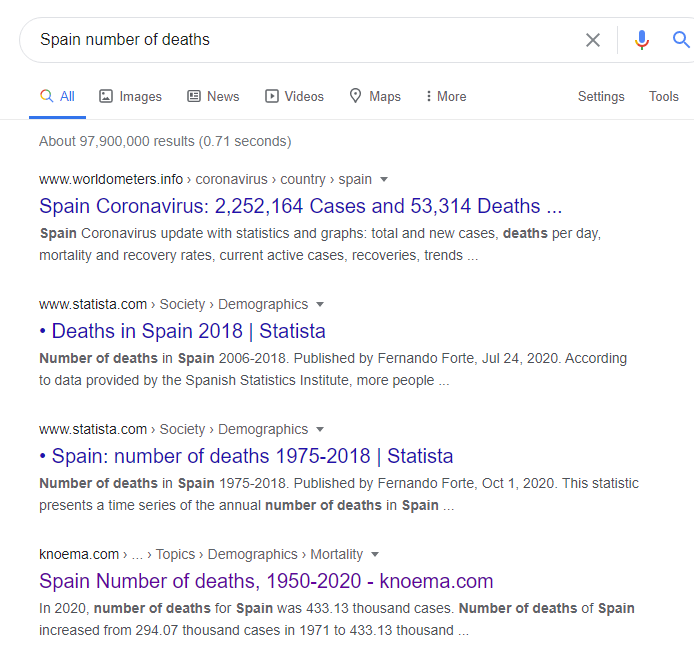 which is probably how the other user who used this data without hesitation in a question (to state a fact: "overall deaths in spain in 2020 were not significantly more than expected") found it. Now Schmuddi argues that I cannot challenge someone's statement in a Skeptics' question because it's just one person believing that data.

But what about the data site's google rank, on a specific query? Does that establish notability?

More generally, outside of social media that has "like" and view counters displayed etc., when is a website notable?

You either misunderstood or misrepresent my comments.

In my first comment, I asked about (not challenge) the notability of knoema.com. This was an honest question because I don't know that website. As the burden of showing notability rests on the OP, I still consider that a valid question. I will address that question later.

I stand for my other comment. You argue here and in the comments that the claim is notable because the number was used in another question. I do challenge this argument. In order to be a notable claim, the claim has to be believed by many, or has to be made by a notable reference. A single skeptics.SE user isn't a notable reference, and it's not evidence that the claim is believed by many. That the question was not downvoted is rather poor evidence that other viewers also believe this number. So, on this basis alone, the claim you question is not notable.

However: Your Google search does suggest that knoema.com may indeed be a notable reference because websites that rank highly are either relevant or have a good SEO department. If you had posted this in response to my honest question, we wouldn't be having this discussion. What's more, I've now learned that knoema.com has been highlighted by at least one reputable source in 2012 (theguardian.com. In addition to likes, such an article seems to be enough to show that the source is sufficiently trustworthy.

It seems, then, that the claim that you're skeptical of is indeed notable. However, this notability comes from the fact that the website is apparently notable, not because a figure from that website was used in another question.

Not the answer you're looking for? Browse other questions tagged discussion notability .

8
How notable does a claim need to be?
23
If a claim is commonly accepted, does questioning it require a notable counter-claim?
34
What is a 'notable' claim?
2
Does a notable claim in a question have to be definite?
2
Does the non-notable close reason apply to claims that already ostensibly provide evidence?
8
How to prove notability when addressing a claim very common within an internet subculture that doesn't have a clear notable person making the claim?
14
Does a notable claim remain notable if notable sources remove the claim?
2
Has there ever been a notable claim that justifies a question that starts with "Has there ever been"?