We all know that comments are inadequate for discussions, the chat should be used instead.

True; but it often isn’t. Rather, length discussions do take place – after a fashion – inside the comments.

… And then they are deleted by moderators. I understand the rationale behind this, and I believe it’s the right thing to do. But on the other hand it sometimes destroys valuable discussions, and in particular painstakingly formulated arguments.

At best, this is really annoying. At worst, it costs the participants a lot of time.

Again, I realize that the obvious reply is “well, they should have used the chat” but this misses the reality of how Stack Exchange is used.

I would therefore request / suggest that the deleting moderators copy the deleted comments into a chat window and paste a link to the transcript along with their deletion message inside the comments.

That way, the argument isn’t completely lost, and can be resumed in the chat without painstakingly piercing together the thread of discussion.

We're experimenting with a new feature, codenamed "Get-A-Room", to offer a solution for this. It's currently active on Meta Stack Overflow only, but will pretty soon be active everywhere (with a higher threshold on meta sites than on normal sites).

When we detect that there's a back-and-forth discussion taking place between two people in the comments of a post, they'll see this: 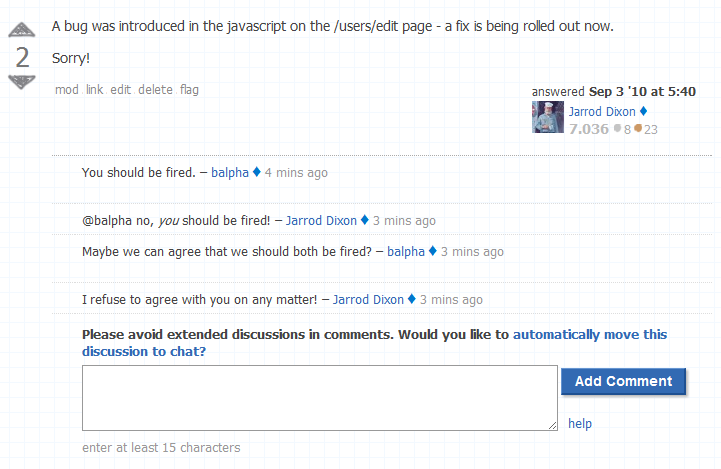 For starters, this will be (and is) optional, to just to nudge them to take it to chat; but sooner or later, we'll probably block the users from commenting further and thus force them to go to chat.

Here's the first example of a room that was created through such a link: http://chat.meta.stackoverflow.com/transcript/390

For longer comment threads we generally copy them to the moderator chat before deleting. So we can provide the text if you need it, but we obviously won't do that for comments that were deleted due to being offensive.

In my experience, going back to StackOverflow beta days, comments come in three forms:

1) Clarifications of details of a particular answer,

2) differences of opinion which could be fleshed out in a parallel answer or even a separate question, but aren't for some reason,

3) and general banter with is normally of no consequence.

The first are obviously unproblematic and normally are helpful to be preserved. The third probably belong in chat if it's anything more than a little joke, compliment, or observation. The second are more complicated to deal with and depend on why the comment field was used instead of some other mechanism of communication.

(This issue is by no means new. In the Usenet days, there was a difference of opinion about how to use out-of-band communication such as email. Comments are nominally out-of-band, but since they are public, they function in-band as a rule. Chat seems to be a bit further down the continuum.)

The natural thing to do if you see an answer you disagree with is to vote it down, and vote up or write a competing question. In the long run, this will produce better answers as correct answers bubble to the top over time. It's a sort of ongoing adversarial trial system in which each side puts forward their best arguments and the most convincing are selected by a jury of the people. Note that this puts the conflict at the answer level where the Stack Exchange system is best able to deal with the edits, votes, and comments needed to produce well-reasoned arguments.

One reason for using comments rather than use another answer is that there is some tangential problem to a particular answer. In this case, the answer included an entirely superfluous skeptical about evolution that prompted a comment supporting evolution. (It also exhibited ad hominem in my opinion, but that seemed to be just the spark that lit the fire. The fact that the comment was of form #2 listed above was the fuel. Again, this is my opinion.) The trouble is that comments are not sufficient to support sort of reasoning needed to defend a substantial position such as accepting evolution. (It's simpler to use a shortcut such as ad hominem.)

A better approach in this sort of case is to provide a link to some other answer or question that deals with the issue. Ideally the link will neither need nor have further comment. Those who are interested will be transported to the proper location without the temptation to further comment.

Another reason to use comments of the second form is that you can signal disagreement without your position being subject to the sort of scrutiny a full-fledged answer would receive. I don't have much to say about this reason because I have little respect for this type of cowardice. There is no reason not to support or write an alternative answer.

The final reason is the main reason I find myself caught up in comment wars: responding to other comments of form #2. See the comments at this question for an example. I believe my initial comment was constructive to the answer, but it appeared inappropriate to another user. In turn, his comment seemed unhelpful to me. We exchanged comments that drifted from the goal of helping this answer be better. Every step on the way, I considered going to meta.skeptics.stackexchange.com, but didn't because it was easier just to add one more comment. Ugh.

So for the final type of comment, the best choice is to take it to meta as soon as possible and refrain from responding in kind. (May I heed my own advice!)

I think taking comments of form #2 to chat is a step in the wrong direction.

It's been pointed out in the comments, that an official motivation for commenting is to explain a downvote. I believe the intention was to encourage comments of type #1. But I suspect the effect is to cause comments of type #2. For instance, if you think an answer is completely off-base, you'll vote it down. Then a popup will encourage you to provide a rationale for your vote. So you'd naturally write a comment that the answer is completely off-base. Unless you are unusually considerate, that comment will be perceived as type #2 above, which I argue is counter-productive and probably not what the system is designed to produce. If so, this is really an issue for meta.stackoverflow.com.

Not the answer you're looking for? Browse other questions tagged discussion comments deletion chat .

5
Philosophical discussions about skepticism
2
Repeated comment by Moderators.
1
Could we please be better at preventing discussions from becoming non-constructive?
4
How do you succesfully challenge a moderators deletion of a question/answer?
0
Should we routinely move more comment threads to chat?
0
Deletion of an answer without good reason
3
Answer moved to comment by mod
1
Why was my comment deleted? (And questions about policy.)
4
Rude/abusive comment left on a now-deleted question; what can be done about it?
1
Why was this answer converted into a comment?